In our last post, we covered the unexpected announcement of the AirPods Pro, an upgraded and premium option above the standard AirPods.  Since then we have acquired a pair and here are our thoughts.

I’ve had the AirPods Pro for about two weeks now, here’s what I think:

Coming from someone who has never owned a pair of noise cancelling headphones, this is a wild new feature.  When I put the AirPods Pro on, suddenly all the background noise around me just disappears.  It’s a little bit shocking at first, especially if you’ve never experienced this before.  Though it doesn’t completely silence things, it almost feels like you are just closing the door in your room to outside sound.  Loud sounds are heard, but almost like background noise, they are muffled.  Fan sounds, white noise, and quieter sounds are completely gone.  While out and about, this can be a bit of an issue.  While walking the dog, a bus came up behind me and caught me off guard because I didn’t hear it coming for example.  Apple thought of this use case, and includes a feature called Transparency Mode.  A long button press on the new, shorter stems changes the mode and lets the outside sounds in, and enhances them a bit.  It feels almost like a hearing improvement as some noises are enhanced as well.  All in all, I’m impressed by the new feature, and it does make music and podcasts sound better when the outside noises are quieted.

That brings us to the quality of the sound we are now hearing.  To be completely honest, I was hoping for better sound.  That isn’t to say the sound is bad.  It’s just not as great as I was hoping.  Many reviewers say the Sony WF-1000XM3s sound better, and that would not surprise me.  I’m spoiled though by my Apple HomePods, which are the best sounding speakers I own.  I’m not an audiophile by a long stretch, so I wouldn’t be able to weigh in on how they compare to higher end speakers, but they aren’t really aimed at those folks.  Sound though is clear, loud enough, and sound good enough to get you through the day.  They do sound better than the standard AirPods though.

Just a couple of things of note here.  The carrying case is a bit larger and more rectangular.  For original AirPods owners, it takes some getting used to.  This for me is because they changed the location of the stems on the AirPods Pro and how the sit in the case.  The stems now insert on the outside edges of the inner casing, where as before they lined up in the middle of the inside casing.  I am constantly putting the wrong AirPod Pro in the wrong side, only to have to switch it because I’m so used to the standard AirPods.  It’s a minor thing, but it’s a thing.  The wireless charging aspect is nice to have, but doesn’t move the needle for me in terms of a reason to buy it or not.  This is something of note, because if you aren’t gonna by the AirPods Pro, the AirPods without wireless charging are the better choice in my opinion.  Wireless charging still seems to be a ways off.  In my testing, I didn’t get a fast enough charge from the wireless charger I have, which could be the issue.  For me though, the lightning connector works just fine.

One additional design change is the move from a one size fits all strategy, to removable tips that come in three sizes.  This is to help create a more comfortable seal on your ear canal and is critical to the noise cancellation working.  Since I’ve never had problems with Apple’s headphones fitting, the medium ones that came with my AirPods Pro fit just fine.  Apple also built in a test for your fit, and running it will let you know if they are able to create a seal.  AirPods Pro also feature sweat resistance, though I didn’t have any issues with the original AirPods in that regard.

Battery life has been as advertised, though it is notable that using noise cancellation knocks about a half hour of the AirPods original 5 hours of battery life.  The case still includes all the extra charge you need, and charges quickly in between uses.

AirPods Pro are a great higher end option for those who are looking for noise cancellation, a better fit, or perhaps sweat resistance and a better fit when working out.  Just like the AirPods, the wire free approach is fantastic, and they “just work” as you’d expect out of an Apple product.  I recommend them, even if the sound quality could be improved a bit more.

On November 13th, Apple quietly released an all new, redesigned MacBook Pro.  The new Mac replaces the 15-inch model in their lineup and has a few notable improvements.  Among the new features, an all new redesigned keyboard, speaker system, and a new screen size of 16 inches are what we’ll be focusing on.  Let’s dive in.

Mac users have had it pretty good over the years when it comes to keyboards.  That all changed when in 2016 Apple introduced their newly redesigned notebooks featuring at the time a completely redesigned keyboard.  This keyboard had a different way of working using a butterfly key design instead of the traditional scissor key design that was in MacBook Pros prior to 2016.  The new designed promised a low profile, improved stability, and could be used in thinner notebooks due to a smaller key travel from open to pressed.

Problems began arising though where keys would register twice when pressed, not register when being pressed, or would get dust or debris caught under them.  In many cases, this would require an entire keyboard replacement that may take up to a week to repair.  Though Apple never releases their repair numbers, they did acknowledge the issue and have a keyboard replacement program in place for those affected.  Though Apple did say that their repair numbers did not largely increase, there is a growing number of reports online that this keyboard was a problem.  Now fast forward back to 2019 and Apple’s solution to this issue, the new Magic Keyboard on the 16 inch MacBook Pro. 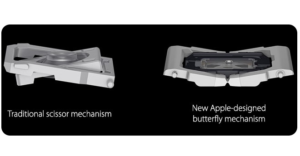 Apple chose to replace the butterfly key design with an improved scissor-based design.  They also increased spacing between the keys, and added back some key travel.  Another change that many programmers were clamoring about was also added, the addition of a physical Escape key.  In the dozens of reviews I’ve read, the keyboard design is a vast improvement, and has quieted the concerns of their critics.  I give kudos to Apple for addressing this problem.  It was so bad for a while, that I myself had stopped recommending MacBook Pros to most people.  That said, I am cautiously optimistic that this Mac puts Apple back on solid footing.

Another change Apple made is an upgrade 6 speaker system that reviewers are saying is the best sound they’ve ever heard on a Mac before.  It’s my hope that the improvements to the speaker system will cut down on blown speakers, as they are still glued into the design of the top case, meaning they can’t be replaced by themselves.  Hopefully this is true and the added improvements quality-wise are welcome, even if there wasn’t a major problem with the last set.

Apple has also increased the size of the display as well.  By reducing the bezels around the screen, Apple was able to fit a 16″ size in roughly the same footprint as the 15″ model it replaces.  It is true that it’s slightly bigger, but most reviewers say if you have a 15″ model now and have a little bit of room in your bag, the new 16″ model will fit just fine.  That means plastic snap on cases need to be replaced if you are using them, but your bag or sleeve may still work.  It’s really quite nice that they didn’t have to increase the size too much to be able to fit the screen.  Quality wise, the display is a bit brighter and has a bit more resolution, but nothing major here.

A couple of additional side notes that really help make this a great Mac include a better default storage capacity.  The new MacBook Pro 16-inch comes standard with 512GB of storage, finally getting back to a default storage size above 500GB, which is where we were with traditional hard drives in 2011.  In 2019, we finally get the same hard drive size, but benefit from the amazing speeds of Apple’s on board flash-based hard drives.  Yes, you read that right, on board.  For most folks, this doesn’t make much difference, as 512GB is a decent amount of storage.  But bear in mind, this internal disk is on the logic board, meaning it cannot be upgraded.  A 1TB model and upgrade in processors from a 6 core i7 to an 8 core i9 is $2799 with up to 8TB of storage available as custom built options.

At the end of the day, the MacBook Pro 16-inch is blowing away reviewers with its keyboard that finally fixes a longstanding issue for customers, a new larger screen size, and improved audio.  The hard drive sizes, addition of an escape key, and more put Apple back on the map with a MacBook Pro I can now recommend to customers with demanding workloads.  The question now is, will they do the same to their MacBook Pro 13-inch and Air designs that appeal to a majority of users.  Stay tuned!