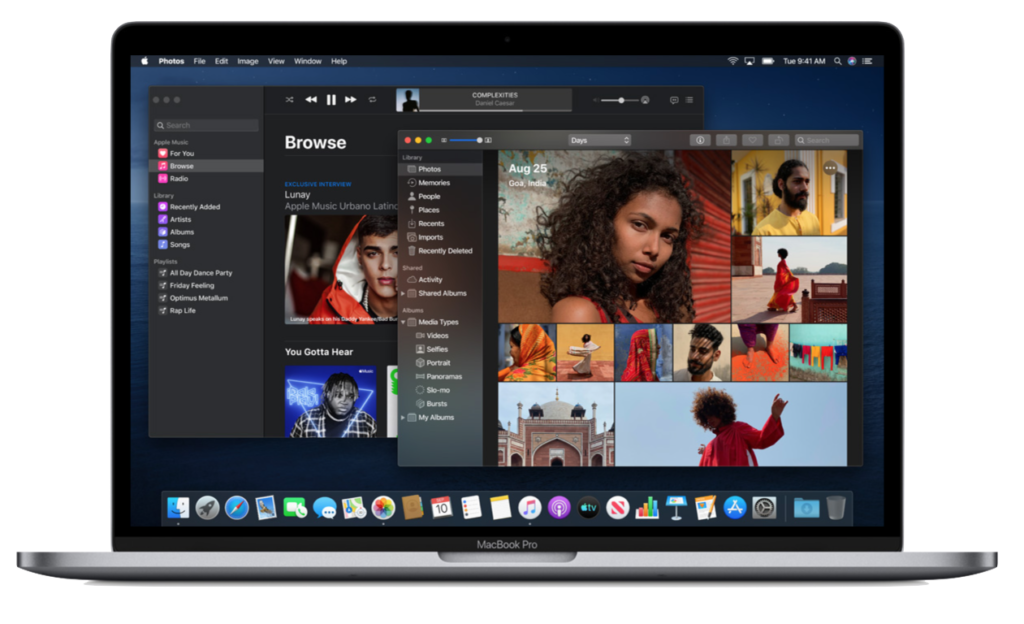 On Monday, October 7th, 2019 Apple released its annual major update to macOS, moving us from macOS Mojave version 10.14.6, to macOS Catalina version 10.15.  Catalina brings several enhancements and new features, a few of which we’ll discuss below.  However, there are also several changes to the system that users may want to consider before taking the plunge.  One major new change is the retirement of iTunes and the introduction of the Music, Podcasts, and TV and device syncing through the Finder.  Let’s start with this, and then we’ll outline a few new features like the new enhanced Reminders app, the Sidecar feature that allows your iPad to function as a second Pencil-compatible screen for your Mac, and some under the hood changes to be aware of.

Over the years, Apple’s iTunes software had become a bit of a hot mess.  As the iPod and iPhone were introduced, they built in all the syncing processes for your new devices in iTunes.  As their Movie and TV Shows businesses grew, so did the need for them to get their own application along with Podcasts.  With all these living under the umbrella of iTunes, many users grew frustrated and confused by all the features.  Finally, Apple made the move to do something about this confusion in macOS Catalina.  By splitting these functions into three distinct applications and simply moving the device syncing into the Finder, Apple has now achieved parity with their iOS cousins, the iPhone and iPad.  Just like on your iPhone, you can now open the Music app when you are ready to rock out or relax with some new music.  This is also true for Podcasts, which also gets its own dedicated app now.  The new TV app gives you access to your purchased Movies and TV Shows through its Library tab.

Audiobooks that were stored in iTunes have moved to the Books application, and when you want to plug in your iPhone or iPad to sync items, the Finder now takes over for those duties.  While these changes helps set Apple up for parity moving forward, it was not without sacrifice.  While this may not affect all users, in the process of separating this out, they decide to remove the XML support for media libraries in iTunes, something that DJs and content producers rely on in order to locate and learn more about their music files.  It is possible to export an XML file of your music in the menu bar under File > Library > Export Library… it remains to be seen what affect this will have in every possible use case.  In other words, DJs and content producers may want to research and talk to third party developers that make the apps they use before upgrading. 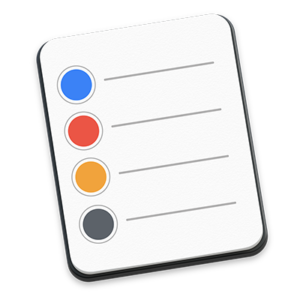 The Reminders application has been reengineered across all of Apple’s devices.  Both on iPhone and iPad, as well as on the Mac, you now have a high level overview on the left hand side which displays all your different Reminders lists.  New Quick Toolbar options allow you to sign Due Dates, Location Alerts, flagging, and attachments to your reminders.  You can even create subtasks for Reminders, helping you keep larger Reminders on task by breaking them down into smaller to do’s.  In practice it’s really convenient and I find the location reminders to be especially helpful.  Being able to remind me as I’m arriving at the grocery store for example of my shopping list, is the perfect time to get your reminder.

You can also add Tasks from other accounts you may have, like an Exchange account with a Tasks list for example.  The ability to share your Reminders with others is also a useful feature and allows you and your significant other or business partner to keep on track.

Also introduced in Catalina is an all new feature called SideCar.  SideCar allows your iPad to act as a second, and more importantly, Apple Pencil compatible, display.  Simply connect from your Mac to your iPad wirelessly or with a cable and your Mac sets it up as a second location for you to drag windows and either view them, or to draw on.  If you have a program like Adobe Creative Cloud, Pixelmator Pro, or many other drawing applications, you can now use the Apple Pencil to draw right on the screen and into your file on your Mac.  Many people use drawing tablets from Wacom or other manufacturers to achieve a similar result, but now you can simply use your iPad.

Under the Hood Changes

Along with all of these enhancements, Apple has also improved on a few things.  Introduced first in macOS Mojave, Apple has now expanded its Marzipan initiative that allows developers to bring their iPad apps to the Mac with very little changes in the code.  With Mojave, Apple gave us the News, Stocks, and Voice Memos apps from iOS.  Now this is improved, with better performance, and the ability for third party companies to bring their apps over as well.

Another change that is of concern to folks with older software is the removal of all 32-bit code from the system.  macOS now only works with 64-bit applications which allow for apps to have access to more memory, and more modern features.  What it means for everyday people is that older applications like Adobe Creative Suite, and older versions of Microsoft Office will no longer function along with many older games and other applications.  This has major ramifications for businesses that rely on these older applications, so it is advisable to do some research on what options you have before you upgrade.

One security focused enhancement has to do with the way Apple installs Catalina onto your Mac.  Starting with High Sierra Apple introduced the APFS file system, a modern file system designed to work on modern solid state hard drives.  Apple added support in Mojave for traditional rotational hard drives, and now is requiring that your Mac boots up on APFS.  It also separates out the OS and moves it to a read-only partition for security reasons.  This change does not look any different to the average user in the Finder, and Apple is using something called “Firmlinking” to make the Macintosh HD appear as one partition in the Finder, though if you open Disk Utility, you’ll see the partitions as they are.  Below is a photo of the Disk Utility on a Mac with Catalina and Windows 10 Pro through BootCamp, which made the transition just fine. 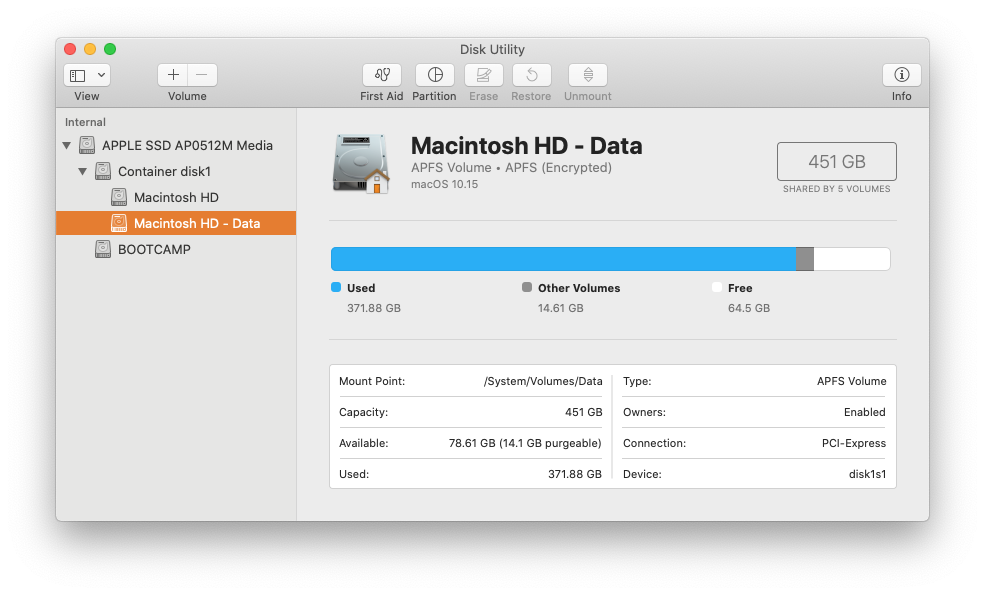 Mac OS now has a System and a Data Partition, with the System being a Read Only Partition.

So the question everyone is asking is, “When should I upgrade?”  That answer will vary for each person.  If you are brave, have a backup, and desperately want to try out the new features, then you can jump right in.  Though reports online and in my personal use will tell you that there are definitely new glitches and bugs that need to be ironed out.  In my case, after completing the installation and rebooting, the Mac locked up during the Privacy Screen in the Setup Assistant.  After rebooting, I then only had to type my Apple ID password about a dozen times.  Since then however, things have settled down and I am able to use my Mac to complete work.  I have Boot Camp, Microsoft Office 365, Pixelmator Pro, Final Cut Pro, Motion, and Compressor installed, and haven’t noticed any show stopping bugs yet, though I’ve only had it installed for a few days.

For those that don’t like to deal with glitches and typing Apple ID information over and over, I’d wait.  Likewise if you have older programs that won’t work under the new system.  Folks who don’t have a backup will 100% want to make a backup before they upgrade, though this is a general recommendation I make for every major OS release.  I’ll be following up on this article as Apple updates Catalina and will give a thumb’s up when I think they’ve resolved the most annoying glitches.

If you would like to make an appointment with me to discuss your individual situation, or want to have a watchful eye take your Mac through the process, Tech Savvy Maui is offering a Catalina Consult appointment for just $24.95.  We’ll go through your Mac together, point out what you’ll need to prepare for, and we can choose a service to complete the process for you if you like.  The OS upgrade service is $49.95 and we also offer backups for $99.95 if you’d like help getting started with backups.  Please click the button below to get started.

Looking for more information?  Below are support articles for most of the features outlined above:

Get scheduled for your Catalina Consultation today!